Dr. Abby submitted an article to the “Obesity Medicine Association” and they published it in their newsletter!!!

Here is the article for you all to read:

Body Shaming and Weight BiasHow to Protect Yourself and Others 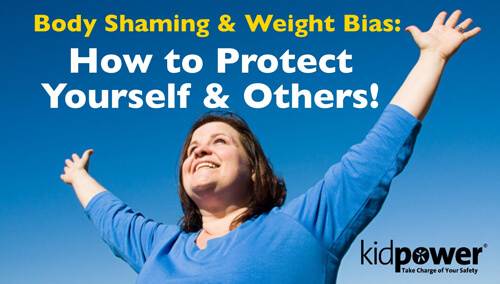 Fat. Lazy. Ugly.  One of the most common causes of body shaming is because of “Weight Bias”, which means the cruel bullying and negative images that bombard people who carry extra weight, often causing them to believe that they are indeed “worth less” than others – and leading to harmful long-term health consequences.

In the following article, Healthful Life MD and Kidpower Board member Dr. Abby Bleistein shares her expertise about the constant harassment her patients face from others, how people carrying extra weight turn this bullying against themselves, recent studies documenting the damage done by weight bias, and some skills from Kidpower that her patients have found to be helpful. For more information about her important work, visit https://healthfullifemd.com.

Weight bias is a very significant and very real experience for most of my patients. From the judgment or dismissiveness of physicians, to the side-long looks when taking their seat on an airplane, to offensive jokes by the water cooler at work, to open cruelty by colleagues and family, my patients have seen it all.

One patient described an episode at work that was particularly upsetting. She worked as an emergency dispatch operator. One very busy day, she was managing multiple calls regarding an emergency, from the victims to the first responders and back. She had to put the fire fighters on hold to clarify information from one of the victims. The firefighters, not realizing that they were not on mute complained into the system, “Well, if she would put that doughnut down, maybe we wouldn’t have to wait!” My patient was angry and hurt, but honestly, the first thing she felt was embarrassment and shame.

I see so much suffering from the acceptance of weight bias in our society and culture, I see my hackles rise with ideas of social justice, and my heart breaks for the good people who experience these, often daily, insults. Recent research indicates that the harm done goes beyond emotional suffering to causing lasting physical damage as well.

With better understanding of the issues involved and some tools for personal safety, we can take action to prepare our patients to advocate for themselves – and to protect themselves from internalizing the destructive messages caused by weight bias. We can also prepare parents, educators, and others to speak up instead of ignoring these messages.

Weight bias is the inclination to form unreasonable and negative judgments based on a person’s weight.1 Stigma is the social sign that is carried by a person who is a victim of prejudice and weight bias.1 The consequences of this bias can be seen in a variety life arenas.

In the media, people who carry extra weight are less often in leading, and particularly in romantic roles. They are most often portrayed with less desirable or even negative, stereotypical character traits. They are also frequently the objects of jokes. These images reflect societal views but also work to reinforce those views and legitimize them. Imagine the impact on children, and their general development, seeing these stereotypes consistently throughout their viewing.

In addition, kids who carry extra weight are bullied at rates 2 1/2 times that of their normal weight peers.3 One study examining quality of life scores (QOL) for kids found that kids who carry extra weight report lower QOL scores than their normal weight peers, and in fact, have score comparable to the scores of kids undergoing treatment for cancer.4 I have had patients who had to leave schools because of the bullying they experienced, and who completed their schooling through on-line or home schooling because they did not feel safe in the normal school environment. Studies bear out this situation showing that students who carry extra weight have fewer years of education and are less likely to go to college.

Physicians assign blame to patients who carry extra weight and often communicate their negative judgments. They believe that patients will not get better, spend less time with them, and also forgo examinations, often skipping routine screenings and exams. Facing this inherent bias leads to feelings of shame and discomfort. The result is that many patients who carry extra weight delay or avoid going to their doctor, which may delay diagnoses or even lead to worse illness that is not monitored or treated appropriately.

Sadly, weight bias can be internalized—the negative judgments and associated stigma can become part of an individual’s thought patterns with regard to themselves and their own self worth. So often the patients I work with describe themselves as lazy, even though there is no evidence in their behaviors, actions, or daily living that would indicate laziness. The result of internalized weight bias is not benign. One study indicated that patients who demonstrate internalized weight bias based on a rating scale were more likely to suffer from metabolic disease—greater risk of metabolic syndrome and elevated triglycerides—compared to those who did not demonstrate internalized weight bias.5 The implications are that the expression of weight bias and the associated stigma that people are exposed to can impact health and outcomes. Indeed, if we are exposing our children to these beliefs, it is as if they are being exposed to second hand smoke, slowly and insidiously developing disease from exposure.

How can we make an impact on this problem and reduce its devastating consequences?

First we must be aware that it is happening:
• Notice when biased views are portrayed in the media
• Notice the comments made by those around you that reflect weight bias
• If you are the target of weight bias, identify it for what it is. Do not take these negative message in. Instead, recognize that this prejudice is unjustified, and call it out to yourself, “That’s not safe.”

The following recommendations include some of the excellent tools provided by Kidpower Teenpower Fullpower International, a global nonprofit leader dedicated to providing effective and empowering protection, positive communication, and social safety skills for all ages, abilities, cultures, beliefs, and identities. I am on the Board of Directors and often provide these tools for patients in my practice.

If you are the target of weight bias, and it is safe to respond, be prepared speak up and to protect your feelings from the negative words and actions:

1. Set clear boundaries: “I believe you mean well when you comment about [my weight, my food choices, my exercise], and when you say those things, I feel uncomfortable/hurt/etc. Please stop making those comments to me.” “We don’t talk about weight here. It is against our values of respect and safety. . Please don’t make those kind of jokes around me.”

2. Redirect the behavior: “My eating choices are fine. Tell me more about the trip you just took…” Or, “I don’t want to talk about this subject. Please tell me more about how you are doing.”

3. Be prepared to persist in the face of negative reactions. It is normal for people to react negatively when they have been told that they did something wrong. They often belittle, minimize, or deny. For example, you might say, “I understand that you think I am being overly-sensitive. And I think it is disrespectful to put anyone down about their weight or other differences. Please stop.”.

If setting boundaries is not safe, you can still protect your feelings from emotional triggers.
Walk away from negative conversations. You can just leave quietly or make an excuse about being busy.

• Use an emotional “rain coat,” shielding your heart from the impact, by undoing the negativity: If someone says you are lazy because you are fat, you can say to yourself, “That’s not true! I am effective and efficient at my work.”

Be an Upstander instead of a bystander.
• If you feel safe to do so, interrupt jokes or negative comments. “We don’t talk about weight here. Making fun of people’s identity is not funny or safe. Please stop.”

Use respectful language when you talk about people.
• Avoid using terms like “obese” when describing people. For health care providers, we can talk about people affected by obesity, rather than using obesity as a descriptor: “the obese patient.” Or using the term, “people who carry extra weight.”
• Do not comment about your own weight or other’s weight in negative terms with friends, colleagues, and especially around children.

Be pre-emptive in addressing weight bias.
Because so many patients who are working on healthy lifestyle choices are dealing with weight bias, you can introduce the subject in a way that leaves them feeling less isolated and vulnerable. For example, you might say, “Many people who carry extra weight, have to deal with weight bias. Being treated as less worthy or even just hearing constant putdowns about weight can make it hard not to take in these negative messages. Here are some ways you can protect yourself and advocate for others. “

Additional Resources:
How to Speak Up About Putdowns

Abby Bleistein is a primary care physician board certified in Internal Medicine and Pediatrics. She is also a Kidpower Board member. In this article, Dr. Bleistein describes how she uses Kidpower skills in her outpatient practice.